13 Smart Tricks to Organize Every Room of Your Home

5 Simple Steps to an Awesome Retirement

Big-Ticket Things You Should Never Buy

It’s an eternal dilemma: eat something healthy, or ditch the diet and chow down on rich comfort foods.

Yet when it comes to food, the concepts of “healthy” and “comforting” do not have to be mutually exclusive. Here are some ideas for dishes that allow you to chase away both the blues and unwanted pounds. 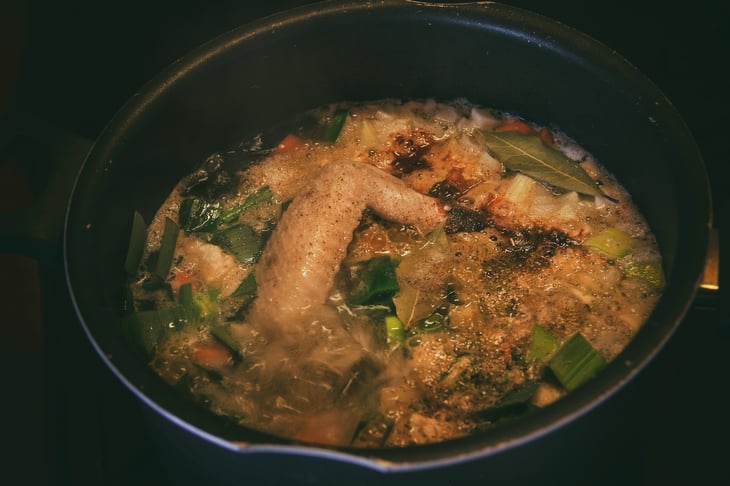 A good bowl of chicken soup is comforting year-round. However, the stock is made with whole chickens, which have been getting progressively fatter — even obese — in the past 40 years.

The fat from the birds infuses the soup as it simmers, and it can be difficult to judge just how much fat there is until it cools and rises to the top of the pot.

Thankfully, there are ways to impart flavor to chicken soup without adding a ton of extra fat. Start with your favorite recipe, but skip the whole chicken and substitute equal weight of on-the-bone chicken breasts. Take the skin off the breasts — because it’s mostly fat — and cook them in the stockpot.

The breasts are the leanest cut of meat on the chicken, and the bones will impart more flavor to the stock.

Or, add a cleaned carcass that’s left over from a roast chicken. It will bring even more richness and complexity without adding much more fat.

To keep this soup healthy, don’t use bouillon powder or cubes, which tend to be high in sodium. Also skip the noodles, which are empty calories. Serve the soup with the cooked chicken, carrots, celery and onions for a protein-packed meal that’s satisfying. 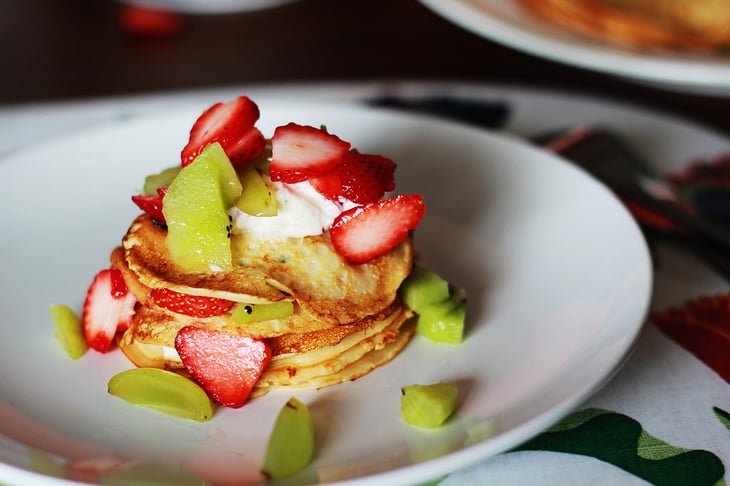 A nice stack of fluffy pancakes might be the ultimate breakfast comfort food. Piled high, smeared with butter, drenched in syrup, they are a sticky-sweet delight.

Those same factors keep pancakes out of the diets of people who are health conscious. Yet, with a few variations, the nutritional value of pancakes starts to look a whole lot better.

Take Alton Brown’s amazing recipe for example. The first modification is to substitute whole-wheat for white flour, but use three-fourths of a cup for every 1 cup for which the recipe calls. (Whole-wheat flour is much heavier.) It adds fiber, nutritious whole grains, and a surprisingly pleasant nuttiness to the pancakes.

The second modification is to use lower-fat buttermilk. For added nutritional value, make sure it’s cultured. This means that it contains active bacteria like those found in yogurt, which have multiple health benefits.

Catherine McCord of Weelicious perfected a recipe for beet pancakes. Not only are they hearty and delicious, but they also have an inviting crimson hue, reminiscent of red velvet cake. They don’t taste like beets either. For an even lower-fat version, substitute nonfat Greek yogurt and 1 percent milk.

Instead of using maple syrup, simmer fresh fruit with a splash of water and a squeeze of lemon until most of the liquid is cooked off. That will leave a thick, chunky, intensely sweet fruit sauce. 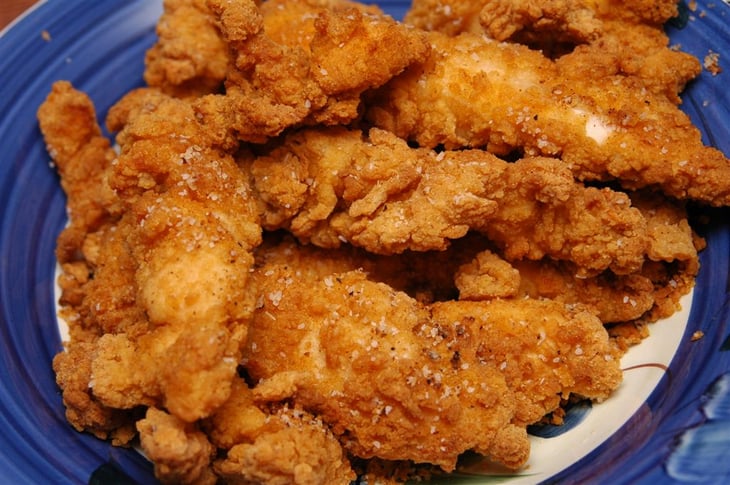 The nutrition facts don’t lie: A single fried chicken breast (again, the leanest cut on the bird) has 20 percent of a day’s worth of saturated fat, plus 96 milligrams of cholesterol, 32 percent of the recommended daily value. And that’s just one piece of chicken.

The problem with fried chicken — and frustratingly, what makes it so good — is the cooking oil. Sure it gets the skin crispy and locks in moisture, but it adds so much fat and cholesterol. Fortunately, a tasty, crispy piece of chicken is possible even without the oil if you combine panko bread crumbs and a trusty oven.

Clean a few boneless, skinless chicken breasts and pat them dry. Season lightly with salt on both sides. Dredge each breast in flour, but instead of using a regular egg wash, dunk the chicken in egg whites, coating each side of the breast. The final result tastes nearly identical to when the recipe is made with whole eggs.

Finally, toss each piece into a bowl of panko breadcrumbs, making sure to cover each side fully. Put the chicken into a greased oven-safe dish — use a non-stick spray because it has no calories — and place into a 350-degree oven for 25-40 minutes, depending on the amount of chicken.

Feel free to go crazy experimenting with different seasonings. Just put the seasoning on after the chicken is breaded and before it goes into the oven so it doesn’t come off in the egg wash. 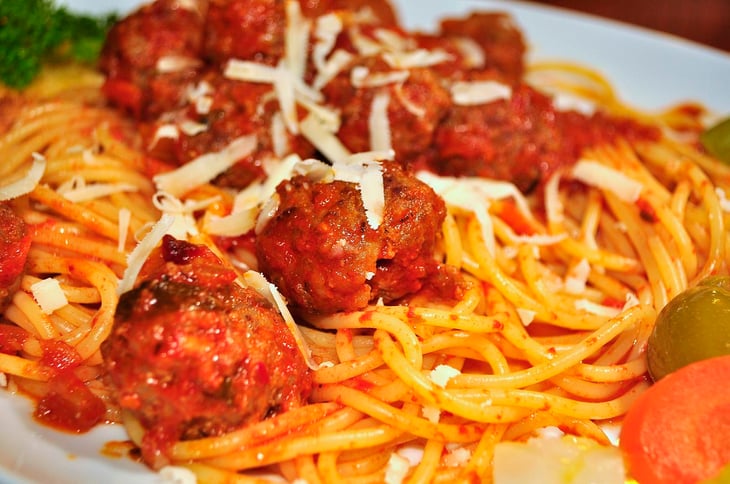 Spaghetti can be pretty unhealthy if it is filled with fatty meatballs, sausage or braciola (basically beef and cheese, rolled up and fried in oil.)

For the healthier version, start with the meatballs and sauce, because they take longer to cook. Use a recipe like this one from Giada De Laurentiis, but forgo the dark meat turkey and spicy Italian turkey sausage. Instead, use equal weight of 99 percent lean ground turkey. Don’t worry if the turkey meatballs get a bit dry while baking in the oven; they’ll reabsorb moisture when placed in the sauce.

Once the meatballs and sauce are simmering, grab some whole-wheat linguine, but only about half of what’s needed. Substitute half of the pasta with a filling vegetable such as zucchini. It will be barely noticeable in terms of the overall dish’s flavor. Slice the zucchini into ribbons and sauté with a bit of garlic and olive oil.

When the zucchini has about 10 minutes left to cook, drop the pasta in boiling water. Then, drain and toss with the zucchini ribbons to combine. Serve immediately with a generous helping of turkey meatballs and sauce. 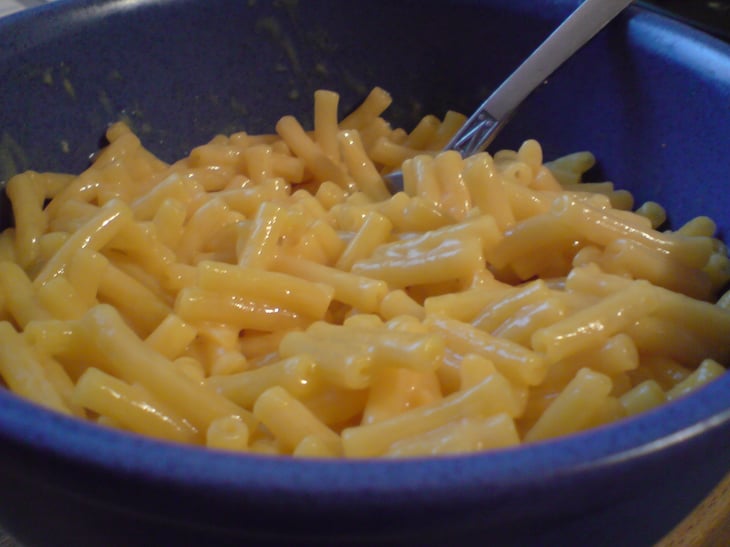 Macaroni and cheese has a strong place in American culture, and yet it has little redeeming nutritional value. Simply put, it’s a mixture of fat and carbohydrates. In order to give this dish a healthy kick, remove a bit of each and substitute vegetables.

A solid option is puréed cauliflower — as in this recipe — because it complements the texture of the melted cheese without affecting its flavor. For a healthier variation on that already healthy recipe, substitute low-fat or part-skim cheddar and Muenster cheeses.

In this recipe, broccoli works as a tasty topping, while the addition of nonfat Greek yogurt helps keep the mac and cheese creamy. Finally, butternut squash is one of the most popular vegetable additions because it has a subtly sweet flavor. More importantly, it looks just like melted cheese in the finished dish. Kelly from Eat Yourself Skinny has devised a delicious recipe that’s low in fat, high in fiber, and honestly tastes like a classic mac and cheese.

America’s Most Reliable Appliance Brand Is a Surprise

Have you heard of this appliance manufacturer?

11 Expenses That Quietly Drain Your Wallet

It’s scandalously easy to overspend in these areas of your life.

These 12 Reusable Products Save You Money Over and Over

Buy reusable versions of these household items, and you won’t have to spend another dime on them for years.

10 Bad Money Habits That Are Robbing You Blind

Here’s how to change those bad behaviors.

These tips on retiring overseas come from someone who’s been helping American expats for decades.

The Next 5 Groups Who Will Get the COVID-19 Vaccine

The CDC has unveiled a schedule that likely will determine who gets the next doses.

For the second straight year, a growing number of Americans believe they’ve fallen prey to this scam.

The rules are complicated when it comes to eligibility for survivors benefits.

Does your retirement budget account for all of these costs?

7 Reasons Not to Move When You Retire
Should You Hire a Service to Negotiate Your Cable and Other Bills?
Replace These 8 Things — for Your Health and Your Budget
Why Cutting the Cord Can Be Confusing — and How to Decide If It’s for You
MTN Solutions Center