2-Minute Money Strategy: How Should I Invest My Retirement Savings?

The Worst Nursing Homes in America Are Revealed

10 Things You Should Never Buy on Amazon

7 Unusual Ways to Declutter Your Home

Many Americans say that their financial situation has stayed about the same since President Donald Trump took office, according to a new Bankrate survey, even as a pandemic-induced recession put the most workers out of a job since the Great Depression.

But some Americans don’t have optimism for the future. Roughly 1 in 4 individuals — 26% — expect that their finances will be better a year from now. Meanwhile, many Americans are split over which presidential ticket will be better for their wallet.

Bankrate commissioned YouGov Plc to conduct this online poll from Aug. 19-21, with a total sample size of 2,418 adults. The figures have been weighted and are representative of all U.S. adults. 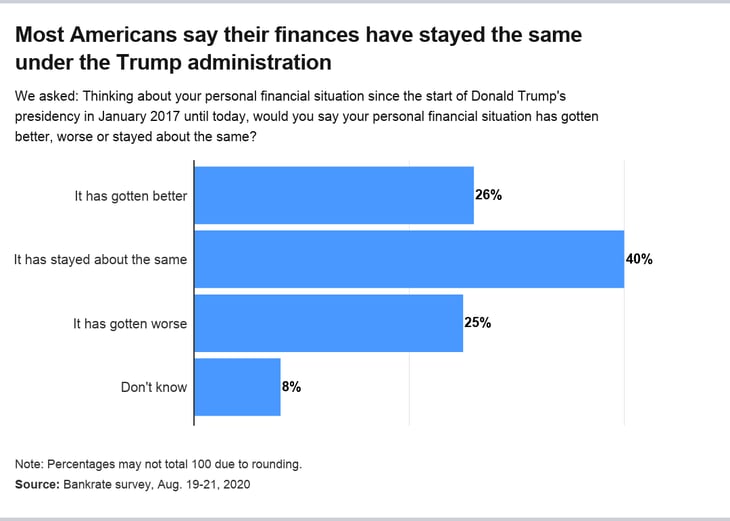 But not all groups share that prosperity. White respondents were nearly two times as likely as Black respondents (31% vs. 16%) to report that their finances have gotten better since Trump took office.

Meanwhile, individuals making more than $80,000 annually disproportionately reported that their finances have improved (41%) under the Trump administration, compared with 19% of those earning less than $30,000.

It highlights the unequal distribution of wealth that burdened the longest expansion on record long before the coronavirus pandemic.

That divide has only widened, with moderate- to low-income communities bearing the brunt of the pain as lower-wage jobs vanished while the U.S. economy shut down to control the spread of the virus.

“One of many unique aspects to the current economic environment is the wide division between the haves and the have-nots,” says Mark Hamrick, Bankrate senior economic analyst and Washington bureau chief. “Those able to work from home and have avoided the loss of a job or income have been relatively unscathed, at least financially. At the same time, unemployment remains historically elevated, and the path of the economic recovery remains uncertain.”

Americans divided over which ticket is best for their finances 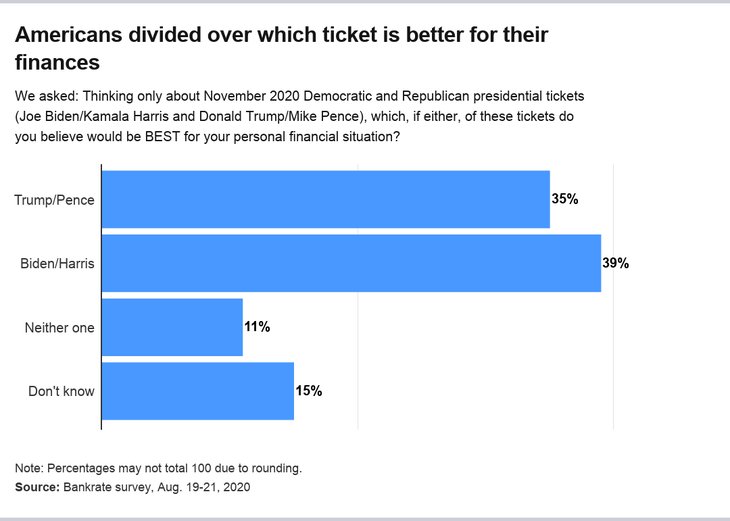 Analysts often blame George H.W. Bush’s and Jimmy Carter’s unsuccessful re-election bids on the economy having entered a downturn that year. Experts have wondered whether the coronavirus pandemic could create that result for Trump.

But even during the worst downturn in generations, no candidate clearly stood out when Americans were asked whether the Republican or Democratic ticket would be best for their finances, Bankrate’s survey finds.

Americans were almost evenly split over each party, though favoring the Democratic ticket only slightly.

About 35% of Americans preferred a Donald Trump and Mike Pence administration, while 39% selected Joe Biden and Kamala Harris. That close split pervaded even among registered voters, with 43% preferring Trump and 45% selecting Biden as the better choice.

Overall, 11% said neither one would be beneficial for their wallet, while 15% reported that they didn’t know.

See Also:
3 Easy Ways to Get Laundry Soap for Nearly Nothing

Those preferring the Republican ticket tended to be White, male and older than 55, the survey found. Meanwhile, Biden and Harris’ supporters were more often women, minorities and college-educated.

Higher-income individuals (those making more than $80,000) were closely split, with 41% favoring Trump and 45% choosing Biden.

Younger people were more likely than older individuals to not know which candidate would be best for their individual financial situation.

About a quarter — 23% — of millennials were undecided over Biden and Trump. That indecision was even more prevalent among Generation Z, the youngest generation, between the ages of 18 and 23, with about 27% saying they didn’t know which candidate would be best. 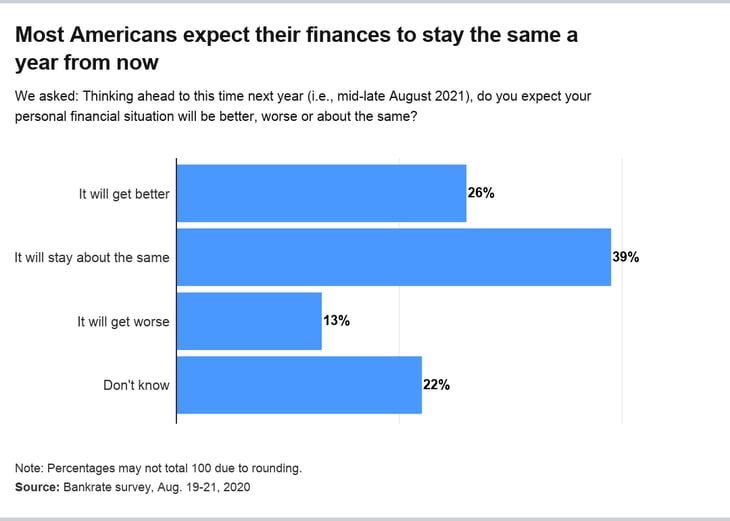 Many Americans aren’t expecting their financial situation to change much in the next year, regardless of who occupies the White House.

About 2 in 5 Americans — 39% — say they expect their finances to be about the same in August 2021, the most of any category. By that time, whoever wins the election would be about seven months into his presidency. About 26% think they’ll be doing better a year from now.

Reflecting the tremendous amount of uncertainty in the months ahead, 22% said they don’t know. And only 13% of Americans expect their finances to be worse a year from now. That could be because of prevailing views that the U.S. economy can only go up from here.

Hispanics are the demographic most worried about the future, with 20% expecting their finances to get worse. Meanwhile, 18% of older millennials (those between the ages of 31-39) and 17% of members of Generation X (ages 40-55) expect to be doing worse, the most of any generation.

One in 5 individuals making less than $30,000 annually expects their finances to be worse a year from now, nearly two times as much as those making $50,000 or more annually.

President’s handling of pandemic a key issue for Americans 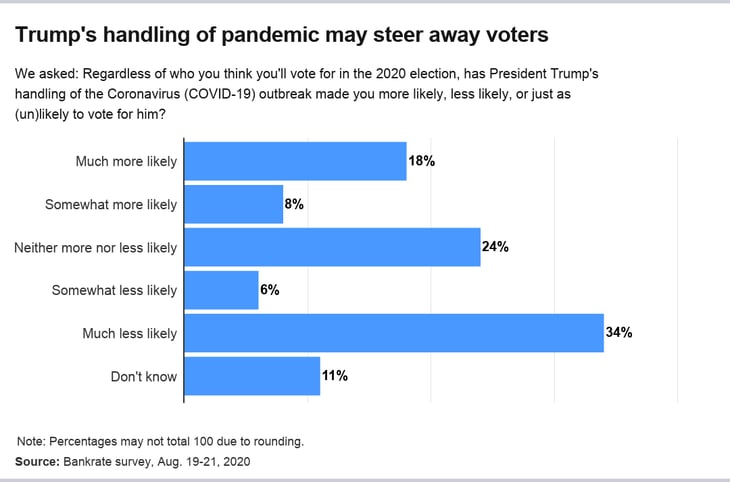 The coronavirus pandemic has taken the spotlight during a year that was initially bound to be all about the presidential election.

Some 39% of Americans said they’re less likely to vote for Trump because of his handling of the pandemic, while 26% said they’re more likely. About 11% said they didn’t know, while 24% said their opinions hadn’t changed because of the coronavirus.

White respondents were more than two times as likely as Black respondents (30% vs. 14%) to say the president’s handling of the coronavirus made them more willing to vote for Trump.

Critiques of the chief executive’s coronavirus response include acting too slowly to stop the spread of the virus, allocating minimal funding for testing, appearing in public without a mask and continuing to organize large-scale events on the campaign trail.

Others praise the president’s response to the economic devastation by signing the largest stimulus package in American history (the CARES Act) into law, though lawmakers on Capitol Hill appear to be gridlocked over the next round of aid.

How to navigate your finances in the months ahead

The devastating effects of the coronavirus pandemic are likely to linger for years to come, with the unemployed outnumbering the number of jobs on the market and growth subdued well into 2022, according to the Fed’s latest forecasts.

It’s smart to safeguard your finances, no matter which administration is voted into office.

“No matter which candidate is sitting in the White House after Inauguration Day in 2021, significant economic challenges will persist,” Hamrick says. “Unemployment is likely to remain substantially higher than pre-pandemic levels. Some industries will continue to struggle, dampening hiring prospects.”

Bankrate commissioned YouGov Plc to conduct this online poll from Aug. 19-21, with a total sample size of 2,418 adults. The figures have been weighted and are representative of all U.S. adults.

These discounts may save you hundreds — even thousands — of dollars a year.

We don’t wish difficulty on anyone, but there can be an upside to a down cycle.

10 Times You’re Right to Be a Cheapskate

Clever shoppers can save money without sacrificing quality. Here is how to do it.

These 5 Laptops Have the Best Battery Life

Need a laptop that runs as long as you do? Check out these models.

8 Ways to Slash the Cost of Homeowners Insurance

Reviewing this critical insurance policy takes a little effort, but it pays off big.

Avoid doing this before you get vaccinated.

11 Products Now in Short Supply Due to the Pandemic

Many goods we take for granted have become tough to find in 2021.

9 Things You Should Never Leave in a Car

Thinking of leaving these possessions in a car? Prepare for unexpected consequences.

Cleaning with vinegar can save you a lot of money, but using it like this can cost you.

These items are all steeply discounted — but the deals won’t last long.

These habits and characteristics can help put you on the track to success.

As we age, our bodies wear down. Here is how to cut costs associated with some common ailments.

Why Is My Pension Killing My Social Security Benefit?
10 Things That Really Are Free on Amazon
10 Places Where Social Security Offers the Best Standard of Living
How to Invest in Real Estate for as Little as $500
MTN Solutions Center