10 Foods That Can Keep for Years

Why Half of Retirees Now Owe Taxes on Social Security

11 Signs That You Chose the Wrong Place to Retire

Some of us need our 220 channels of entertainment bliss, and that’s OK. But if you want to get away from the TV noise, have a little more time or, like me, want some extra cash, then take a good look at your cable bill.

When I studied my bill, I realized that the basic cable subscription that Comcast sold me for $5 a month was costing me $25 a month — $607 over the course of a two-year contract.

Although I’m going to talk about Comcast’s Xfinity service, you can take the same steps I did regardless of what pay-TV service you use.

I’m not a big fan of cable programming, but I need high-speed internet for work. When Xfinity offered to add basic cable to my two-year internet contract for $5 a month, though, I didn’t refuse.

What’s $5, a coffee? A cheap hamburger? You might as well add it, right? Well, that $5 ended up costing me hundreds of dollars.

Technically, the addition of basic cable cost $120 over two years. But by subscribing to cable, I was roped into also paying $12.50 a month in broadcast TV and regional sports fees and an extra $7.81 a month in taxes and surcharges.

So subscribing to basic cable for $5 ended up increasing my bill by a total of $25.31 every month. And over the course of two years, a subscription that I thought would have cost $120 ballooned to $607.44 after adding the extra charges. 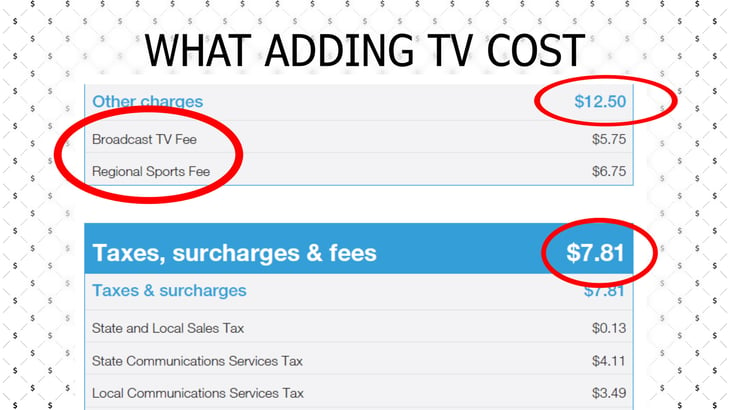 What happened when I quit cable

In July 2018, the two-year sign-up special ended and the internet /TV bundle that previously costed $94 increased to $110, increasing the extra taxes and surcharges with it. My statement totaled roughly $141. So one year’s worth of this bundle would have cost $1,692.

Here’s the kicker: Xfinity was offering my same internet speed at a lower price to new customers. That’s right — they jacked my bill up while charging new customers less money for the same service.

So after talking with an Xfinity representative, I cut my package down strictly to internet with the new lower price. That brought the total on my statement to about $80. That’s an estimated savings of $732 over one year. 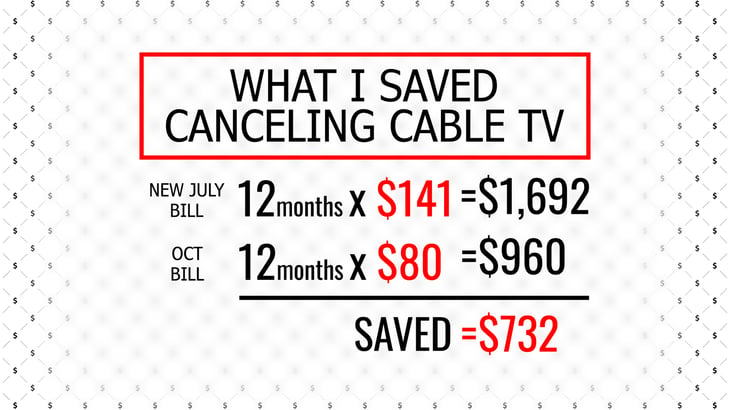 If you’re trying to find some extra cash, look at your cable bill like I did. With the money I saved, my wife and I went to Greece instead of watching it on the Travel Channel.

If you’re not ready to give up TV entirely, check out “Streaming Versus Cable: the Confusing Costs of Cutting the Cord.” It will help you determine whether you could save some money by switching to a streaming TV service.

Don’t let these health care costs catch you off guard in retirement.

Why Is My Pension Killing My Social Security Benefit?

A reader says the government is penalizing him for having a pension. Is he right?

7 Other Retailers With Free Prescription Delivery

The Product of the Year awards help shoppers find the best pet products, personal care items and everything in between.

Why Your Next Stimulus Check Might Be Bigger Than You Expect

Your third coronavirus payment will be the biggest yet — and possibly even bigger than you realize.

One automaker takes half the spots on a list of the longest-lasting vehicles.