The Worst Nursing Homes in America Are Revealed

9 Foods You Should Never Buy Again

This post comes from Gerri Detweiler at partner site Credit.com.

What does the American Dream look like today? For a quarter of American adults in a new Credit.com survey, the answer is simple: It’s being debt-free.

Retiring financially secure at age 65 was the most popular response to the question, “Which of the following financial goals most closely represents the ultimate American Dream for you?” with more than a third of respondents (36 percent) choosing that option.

The next most popular response? A quarter of respondents picked “being debt-free” as their definition of the American Dream in the 2014 Credit.com American Dream Survey, which will be released next week.

Other responses included owning a home (17 percent), joining the “1 percent” (5 percent), graduating from college (3 percent) and paying off student loans (2 percent). Eleven percent of respondents chose the answer “something else.” 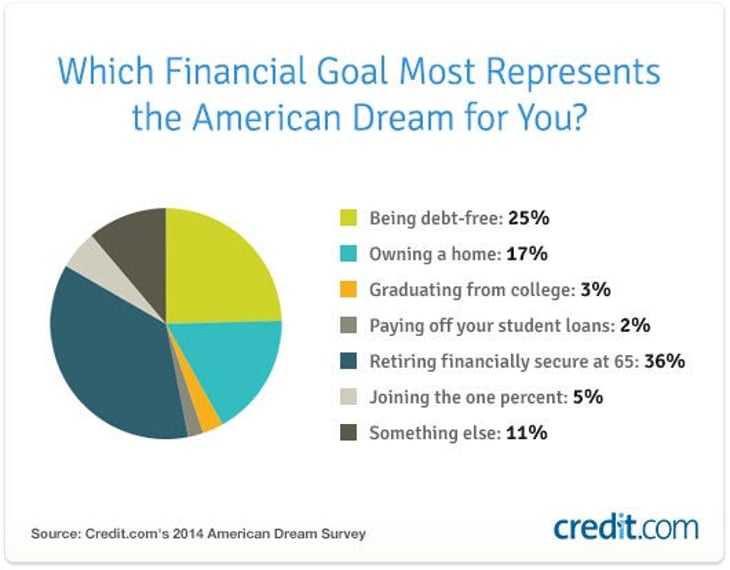 I can do it, but maybe you can’t

Whatever the dream, the majority of respondents were largely optimistic they can achieve it themselves, but significantly less confident that most others can.

These findings confirm a similar survey conducted last year on behalf of Credit.com, where the top definitions of the American Dream included retirement and freedom from debt. In that survey, like this one, most were more optimistic about their own prospects than those of most other Americans.

Of course, these top two goals most respondents identified in both surveys go hand-in-hand. Being debt-free may very well be a vital step toward a financially comfortable retirement.

Consumers can start now by checking their free annual credit reports and by using free tools on Credit.com to check their credit scores, then using that to map out a plan. Here are five steps to get out of debt. Achieving these milestones will require sacrifice and hard work, but reaching the goal of being free from debt can be well worth it.

Why Is My Pension Killing My Social Security Benefit?

A reader says the government is penalizing him for having a pension. Is he right?

9 Purchases That Will Make You More Productive

These Amazon products can give you an extra edge at work and other parts of your life.

Women face unique challenges when planning for retirement and making these mistakes can result in a skimpier retirement.

Eat This Food If You Want to Avoid Alzheimer’s Disease

One type of food associated with the Mediterranean diet offers especially large benefits.

A little money goes a long way with these imaginative projects. You can do most of them yourself.

For the second straight year, a growing number of Americans believe they’ve fallen prey to this scam.

As a new year dawns, deals abound for some types of products. In other cases, it pays to wait.

Does your retirement budget account for all of these costs?

These accounts offer exclusive discounts and other perks — including interest — to older customers.