9 Hidden Ways to Get More Out of Amazon

8 Things I Always Buy at Target

10 Bad Money Habits That Are Robbing You Blind

5 Secrets of Seniors Who Keep Their Minds ‘Young’

﻿﻿﻿What do the Tooth Fairy’s handouts and the Dow Jones Industrial Average have in common? Both are on the rise.

But surely this nonsense is a coincidence, right? Not according to the 13th annual Tooth Fairy Poll [PDF].

This national survey, conducted by oral-education nonprofit Delta Dental, found that the Tooth Fairy was more generous last year than she has been since 2008. Children are receiving an average of $2.52 dollars this year – an 18-percent increase over last year’s $2.13.

In other words, like the Dow Jones, her generosity has been on the rise as the U.S. economy slowly rises from recession.

“This year’s Tooth Fairy Poll average reflects improvements we’re seeing in other areas of the economy,” said Ann Johnson, a director at Delta Dental of Minnesota. “For example, the Dow Jones Industrial Average increased 23 percent during the same time period. The Tooth Fairy may be another indicator that the economy is starting to recover.”

Still skeptical? Check out the numbers for yourself: the green line is the Dow Jones Industrial Average, and the blue line is the Tooth Fairy Index. 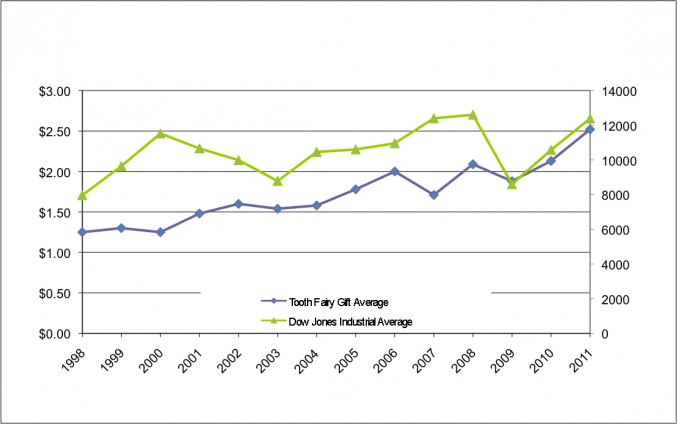 To learn more about the Tooth Fairy Poll, visit TheOfficialToothFairyPoll.com. If the Tooth Fairy no longer supplements your income, try 5 Tips to Take the Bite out of Dental Bills.

If My Spouse Dies, Can I Get Her Social Security?

If a spouse dies, will the survivor collect the other’s share in addition to his or her own?

7 Secret Departments of Amazon You Should Know About

These little-known sections of Amazon are hidden gems for deal-seekers and impulse shoppers alike.

10 Common Expenses That Have Skyrocketed for Seniors

Retirees must stretch their dollars further and further these days — no thanks to these costs.

9 Foods You Should Never Buy Again

Make the wrong food choices, and you can ruin your health — and possibly shorten your life.

How to Save Up to 70% on 7 Everyday Purchases

Stop getting sucked into paying a premium when good alternatives are available at huge savings.

Starting on Jan. 24, the price of various mail and shipping services will rise.

The 10 Golden Rules of Becoming a Millionaire

I’m a millionaire several times over. I got here the same way you can — by following these simple steps.

14 Things That Are ‘Free’ With Medicare
These Medicare Expenses Will Jump in January
16 Affordable Products That Could Save Your Life
Can My Wife Use My Social Security Benefits While Letting Hers Grow?
9 Things You Should Never Pay For With a Debit Card
7 Reasons Not to Move When You Retire
8 Amazon Picks Under $30 for Coffee Lovers
How to Invest in Real Estate for as Little as $500
MTN Solutions Center