9 Genius Storage Solutions for Your Home

Marooned at Home? Earn Some Cash Playing on Your Computer

15 Products You Need — Even If You Didn’t Know It

Young people are flocking to big, expensive cities, according to data crunched by housing market information service RealtyTrac. It’s understandable, but in the long run that might not be the greatest of ideas.

If you look at the chart below, you will see that the Washington, D.C., area occupies three of the top 10 counties where high percentages of millennials are moving in. They are also moving to places like San Francisco, Denver and New York. That’s probably not much of a surprise: Young adults go where opportunity is.

But opportunity is in the eye of the beholder. That second column up above helps explain why those young people aren’t buying houses, which is bad for them and for the economy. That’s the average down payment made for home purchases in those areas. (Note: This is down payment, not price.) So in Washington, D.C., the average buyer shows up with a wallet full of $100,000 or more. Avert your eyes from that San Francisco entry there. Even in Denver, which is clearly not San Francisco, the average down payment is $43,641.

Raise your hand if you knew where to get $100,000 when you were 25. That’s certainly enough to keep young people up at night, and the kind of thing I’m following in The Restless Project.

Mind you, these figures don’t represent required down payments. Plenty of folks are buying homes with far less cash. There’s even a new HUD program that allows buyers to put down as little as 3 percent of the purchase price, as long as they are willing to pay higher fees.

Taken together, it means that young folks, who, remember, are holding an average of $30,000 or so in college debt, may not really find the opportunities they are looking for in America’s big cities.

But there are alternatives.

Now look at the list below, and you’ll see some surprises — like Montgomery and Davidson in Tennessee, where the average down payment is well below the national average. And if you expand the chart a bit, you’ll find some other interesting places with growing populations of young people and affordable homes without the huge down payment barrier. 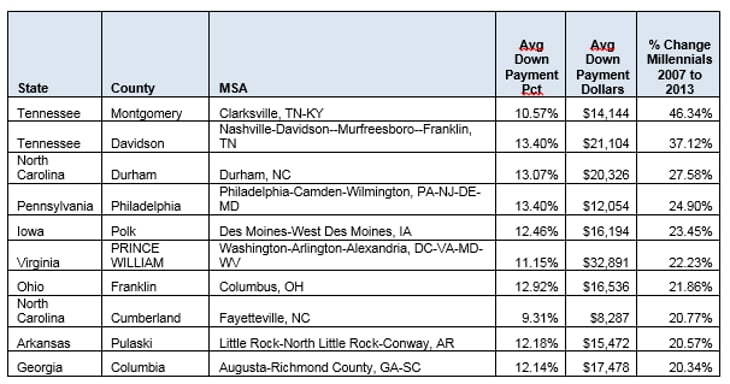 That’s an interesting list of places. Remember, it is possible to get low-down-payment loans in places like New York and San Francisco, and that’s the right thing for many folks. It’s also important to remember that such loans have their drawbacks, like big upfront fees and/or mortgage insurance.

So, it’s worthwhile to at least consider some alternatives.

Bottom line: If you are weighing job prospects, don’t be fooled by a sexy six-figure salary. There are places in America where you can make a life, or at least start one, on half that amount. Don’t be too quick to rule them out.

(To conduct the analysis, RealtyTrac analyzed purchase, loan and sales data for single family homes and condos in 2014 in 386 counties nationwide, examining a total of 1.5 million loans.)

These products will instantly improve your home’s curb appeal without breaking the bank.

A pandemic or natural disaster could leave you reliant on your existing emergency food supply. Is your pantry well-prepared for emergencies? Knowing what to stock up on for emergencies can be a difficult task and we’re here to help.

10 Places Where Social Security Offers the Best Standard of Living

These U.S. counties offer retirees a chance to stretch their benefit checks while enjoying their golden years.

5 Cheap and Easy Ways to Make Your Car Smell Delightful

These tips will leave your ride smelling delightful for next to nothing. Some options are also chemical-free.

9 Items Under $25 That Will Keep Your House Clean

We’ve rounded up some of the best products for cleaning your bathroom, kitchen and every other room.

Starting on Jan. 24, the price of various mail and shipping services will rise.

The 10 Golden Rules of Becoming a Millionaire

I’m a millionaire several times over. I got here the same way you can — by following these simple steps.