The Annuity Everyone Needs — and Anybody Can Get

7 Gadgets Under $60 That Can Boost Your Health

3 Ways a Health Savings Account Can Improve Your Finances

If you think your car insurance premiums are sucking your wallet dry, you might be right. Or you could be getting a real deal compared with Americans in other states.

Check out these auto insurance premiums from across the nation. They were compiled by career website Zippia using 2017 data from ValuePenguin. You won’t find Hawaii, Missouri or West Virginia listed because updated information from those states wasn’t available. Plus, the figures represent the minimum level of coverage in the state, so, as they say, your mileage may vary.

Once you scroll through the list, and premiums rise from cheapest to priciest, you’ll have to tell us: Do you really have anything to complain about?

If you live in Alaska and complain about the cost of your car insurance, the rest of the country is liable to tell you to quit yer bellyaching. America’s last frontier is home to the cheapest auto insurance in the nation, according to Zippia’s findings.

Car insurance doesn’t cost too much more in North Carolina. Annual premiums for minimum coverage there run about $807 a year.

You can expect to pay around $852 a year for your auto insurance in Arkansas. As the state motto declares, “Regnat populas — The People Rule!”

Some of the cheapest states for auto insurance can be found in practically every region of the U.S., with Idaho representing the lowest cost in the West. The average annual premium for minimum coverage is $1,035 there.

While you may shell out more than a thousand dollars each year for auto insurance in Florida, that’s still cheaper than most of the country.

In the land of cheese, you may pay around $1,129 in annual insurance premiums for the privilege of driving your car. 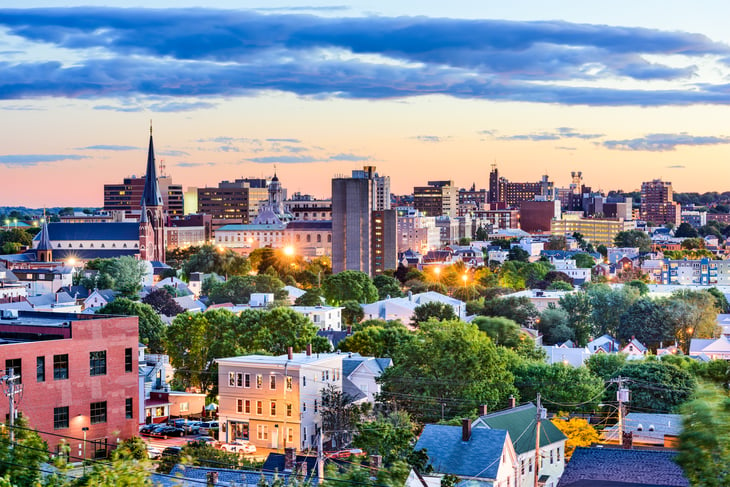 Maine is the cheapest of the New England states, at least when it comes to car insurance premiums. Residents pay an average of $1,141 per year there.

Traveling past the cornfields by car or pickup will set Iowans back an average of $1,147 per year for insurance.

As another Midwest state with relatively reasonable car insurance premiums, Nebraska has annual costs that run about $1,149.

Chicago can be a pricey city, but statewide, the annual cost of car insurance in Illinois is the tenth-cheapest in the country.

In Vermont, annual car insurance premiums for minimum coverage will set you back about $1,161.

A significant number of states, including Tennessee, have auto insurance premiums that run between $1,100 and $1,300 per year.

New Hampshire is the only state in the nation that doesn’t have a mandatory auto insurance law. However, it might still be a good idea to buy coverage. If you do, expect to pay an average of $1,208 per year.

Zippia found the average annual premium for minimum coverage in Kansas is $1,219.

Residents in Wyoming spent an average of $1,223 on insurance to drive their cars in 2017.

The state with the distinctive panhandle isn’t as unique when it comes to auto insurance. Oklahoma is right in the middle of the pack for annual premium costs.

Ohio drivers could complain, but really, $1,236 a year for car insurance isn’t all that bad.

In Utah, residents driving through one of the state’s many national or state parks pay an average of $1,245 a year for their car insurance.

If this Southern state is sweet home to you, then you could be paying $1,249 for your auto insurance.

The price of auto insurance for drivers in North Dakota is only slightly higher than in its neighbor to the south.

The average annual premium in Washington state may be $1,259, but that’s still cheaper than half the country.

Buying a year’s worth of auto insurance in Arizona will leave you with somewhere around $1,306 less in the bank.

New Mexico is next to Arizona both on the map and in these rankings. It costs an average of $1,316 for a year of auto insurance coverage in the “Land of Enchantment.”

With Georgia, we cross the line from the “cheaper” states those with more expensive car insurance. Zippia found Georgians can expect to pay an average of $1,335 for minimum coverage.

Colorado may be home to Denver — the Mile High City — but, fortunately, car insurance premiums aren’t a mile high compared with many U.S. states.

In Indiana — which calls itself “the Crossroads of America” — the average annual premium for auto insurance is $1,365.

To travel the highways and byways in Oregon, be prepared to shell out around $1,371 for a year of car insurance.

New York has a reputation for being expensive, which makes its ranking on this list somewhat surprising. Average annual premiums in the state run $1,450 for minimum coverage, landing it in only the 20th-most-expensive spot.

Before you hit the roads during the next Minnesota winter, you’ll definitely want to have proper insurance coverage. That will cost you an average of $1,485 per year.

In Massachusetts, annual premiums for car insurance will set you back an average of $1,537.

Down in the Palmetto State, South Carolinians pay an average of $1,539 per year for their auto insurance.

Hopefully you hit the jackpot by moving to Nevada. That will make paying an average $1,592 annual car insurance premium a little easier.

In “Big Sky Country,” motorists pay an average of $1,624 a year for their auto insurance coverage.

Rhode Island is almost small enough to walk across. However, if you’d rather drive, plan to spend an average of $1,638 a year for insurance.

Pennsylvania premiums for auto insurance run about $1,644 a year for minimum coverage.

You’re not surprised to find California near the top of the list, are you? The Golden State is known for its high cost of living, and its car insurance premiums fall on the higher end of the spectrum for these rankings.

Mississippians get hit with a bill for about $1,690 each year for their auto insurance coverage.

Kentucky kicks off the top 10 states with the most expensive car insurance. Zippia found drivers there pay an average of $1,885 a year for minimum coverage.

People pay big premiums in the little state of Delaware, the first state on the list to break the $2,000 mark for its drivers’ average annual premiums.

Movers and shakers in Washington, D.C., probably pay a lot more for their expensive cars, and the average cost of minimum coverage for drivers in the nation’s capital isn’t cheap at $2,074 a year.

Maryland motorists pay rates that are slightly more expensive than drivers in the neighboring District of Columbia.

New England is well-represented among the most expensive states for auto insurance. In Connecticut, the average annual price of minimum coverage is $2,228.

New Jersey gets to say it’s in the top five. However, its residents likely won’t be cheering as they hand over somewhere around $2,228 each year for their car insurance.

From the Big Easy to the bayous, Louisiana is an interesting state to explore. But it’s not a cheap place to own a car, given the annual cost of auto insurance.

Is this where we get to say everything is bigger in Texas? Yup, that goes for car insurance premiums, too.

They say Virginia is for lovers, but maybe not car lovers. The average annual cost for auto insurance in the state runs a whopping $2,737 per year.

Sure, Michiganders get unlimited personal injury protection, but they pay dearly for it. It’s one reason the average cost for minimal car insurance in the state tops $3,000 a year. Kind of ironic, considering that Detroit’s automakers got so many Americans rolling down the road in the first place.

Where does your car insurance cost fall on the spectrum? Share with us in comments below or on our Facebook page.

21 Things You Should Always Buy at a Dollar Store

Dollar stores have great bargains on both everyday and occasional purchases.

You could earn more than $600 cash back in your first year just from grocery shopping.

The 10 Best Outdoor Home Upgrades for Your Money

There’s still time this summer to make improvements to the exterior of your home. These offer the best payback.

The internet has changed how we shop. But for some things, you’re still better off buying the old-fashioned way.

5 Medicare Mistakes to Avoid for a Healthy Retirement

Medicare can be confusing. Beware these missteps — which can hike your costs.

Why Your Next Stimulus Check Might Be Bigger Than You Expect

Your third coronavirus payment will be the biggest yet — and possibly even bigger than you realize.

Based on factors like affordability, quality of life and health care, these are not ideal places to spend retirement.