Why Half of Retirees Now Owe Taxes on Social Security

5 Ways Social Security Will Change in 2021

This post comes from Louis Ramirez at partner site DealNews.

One of the biggest myths about Black Friday is that the best deals will be on Friday itself. The writers and editors at DealNews curate the best sales during this time, and we’ve noticed that in recent years stores have increasingly started releasing their deals earlier and earlier.

But if Black Friday is no longer the starting point, when should shoppers be looking? And, while we’re at it, is Cyber Monday as good as it seems? We plotted our Editors’ Choice deals, the sales that offered all-time price lows or best-of-the-year discounts, from 2013 to find out. 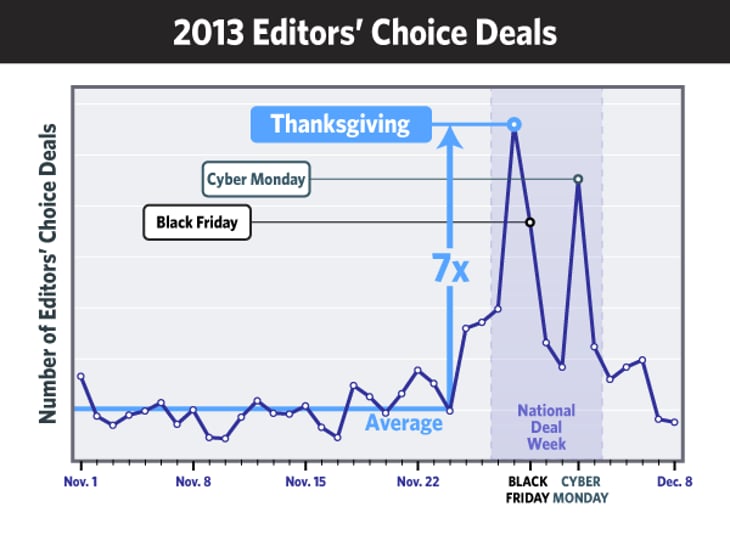 By now, we’re used to the idea of retailers opening their doors early on Thanksgiving Day. However, what consumers don’t yet realize is that the deals you’ll see on Thanksgiving Thursday will be better than those released Friday. In fact, here at DealNews we found that Thanksgiving Day has 29 percent more Editors’ Choice deals than Black Friday.

Moreover, Thanksgiving has seven times as many Editors’ Choice deals than the average day in November, which is already a busy month for sales. Needless to say, consumers looking to save money should begin shopping as early as possible and not wait until Black Friday.

That said, our data indicates that Cyber Monday shoppers should consider shopping early, as the Saturday and Sunday leading up to Cyber Monday see a 40 percent increase (combined) in Editors’ Choice deals compared with the previous weekend’s count. The message is clear: Though you’ll certainly find great deals on Black Friday and Cyber Monday, the days before are equally important, if not more so, because these shopping holidays are no longer about a single day.

While it may sound as though consumers should do all their shopping on Thanksgiving Day, the truth is that the entire month of November will see blockbuster sales. So if you see the item you want at a price that suits your budget, by all means don’t wait to purchase that item later.

If you’re still uncertain, our editors will post several Black Friday sales critiques as the initial wave of circulars are leaked. Each post will highlight that store’s best deals, while taking into account deals found in other circulars.

Although the season was designed to benefit the retailer’s bottom line, with our help, you can avoid overspending and take advantage of the sales that are true doorbusters.

17 Home Maintenance Tasks That Save You Money

Here’s how to cut household costs and maintain your property’s value.

8 Things I Always Buy at Target

I grew up shopping at the original Target store and am a lifelong fan. Here are my favorite purchases.

Here’s what to watch for to make sure you don’t fall prey to some of the biggest rip-offs targeting seniors.

Stop Overpaying for These 10 Common Purchases

The best price for many of these items is “free.”

Don’t let these health care costs catch you off guard in retirement.

These items are all steeply discounted — but the deals won’t last long.

As we age, our bodies wear down. Here is how to cut costs associated with some common ailments.